Infographic Explorations of the Book of Revelation

Revelation Illustrated is an Infographic Guide to the book of Revelation. Through 420 illustrations, John’s visions are depicted verse-by-verse as clearly and objectively as possible. Thematic infographics conveniently offer unique, enlightening perspectives on themes like structure, place, and time.

The quest for a graphic overview

This is the book I was looking for seven years ago when I first picked up the book of Revelation.
Revelation intrigued me, but I was also frustrated by it. Its impenetrable structure, lack of overview, and the moat of differing opinions surrounding it were frustrating.
And to my surprise, no detailed infographic guide or overview of its contents seemed to exist. Given how long our visual culture has been around, that felt unprecedented. The book of Revelation is complex enough to warrant a graphic aid. What’s more, its passages are so evocative that, as far as I’m concerned, they beg to be visualized.
Naturally, books have been written about Revelation in the past. But the downside to many is that they interpret it from a particular theological persuasion or perspective. That makes them less cut out to provide an initial, unbiased, or objective look.
Another drawback is that many books fail to portray Revelation from a zoomed-out or panoramic scale. They tend to hastily zoom in and fixate on specific chapters or passages. This deprives of us an essential tool for understanding this book. Seeing Revelation’s principal structure through overviews or infographics enables us to better study and understand not only its broad framework but also the finer details.
Having spotted this need, I felt inspired to start tinkering on this book as a hobby. I’m not a theologian, eager to or capable of interpreting Revelation. Instead, I see it through the lens of an architect and apply one of my field’s proven methods to plot the book as objectively as possible. Hopefully, this new method will provide more people with a tool for reading and studying the book of Revelation.

I had a hard time wrapping my head around Revelation when I started writing this book. But what is it that makes Revelation so complicated?

A page from architectural methodology

So, when I first encountered Revelation, try as I might, I could not identify the common thread that tied this book together.
And it gradually occurred to me that I’d never be able to make progress until I could zoom out on the text. To draw overarching conclusions about Revelation, I would also need to capture the ties between all 22 chapters in a single field of view. But how?
This kind of problem isn’t uncommon in my field of practice – architecture. When analyzing a complex building, endlessly staring at floor plan after floor plan and cross-section after cross-section is a completely impractical way of gaining insight into a building’s purpose and layout. That’s why design-build remodelers use an “architectural analysis” method for large, complex buildings.
This method involves creating clear, abstract drawings of (thematic constituent aspects of) the building, e.g., loadbearing structures, circulation, and façade openings.. By eliminating as much clutter and as many details as possible, you end up with the core. The core gives you clear, orderly, “zoomed out” schematics of the building. And often, these drawings loosely approximate the architect’s own initial rough sketches, giving the new architect an idea of what they were after.
Put all those abstract drawings and theme analyses side by side, assess them, and what usually happens? The “Eureka!” that cuts through the consternation.
So, why not do the same thing with a book of the Bible? If I couldn’t parse Revelation by reading it, why couldn’t I try to understand it visually?
And that’s just what I did. I plotted all of John’s visions neatly, clearly, and as objectively as possible with 420 illustrations and thematic studies. This book is the result.

How infographics can help

How can an illustrated architectural analysis of the book of Revelation make studying and understanding its complex passages easier?

Studying Revelation through pictures and infographics has proven to be a goldmine. It makes this book an indispensable tool for anyone eager to delve into what is often considered one of the Bible’s most confounding books.
This analysis gave me a whole new perspective on the book of Revelation. The overviews and thematic analyses reveal the interrelational web of John’s visions in a way that I’ve not seen anywhere else. It’s already given me a host of astonishing, clear insights.
My hope and aim is for this book to help anyone setting out to study and read the book of Revelation.

In Revelation Illustrated, Ruben van der Plas takes a revolutionary approach to exploring Revelation. He neatly and meticulously outlines the ancient text, successfully sidestepping having to take a theological side. This book offers a unique look at the Apocalypse accessible to anyone eager to tackle the Bible’s last book.

It’s your chance to catch a never before seen glimpse of the book of Revelation. 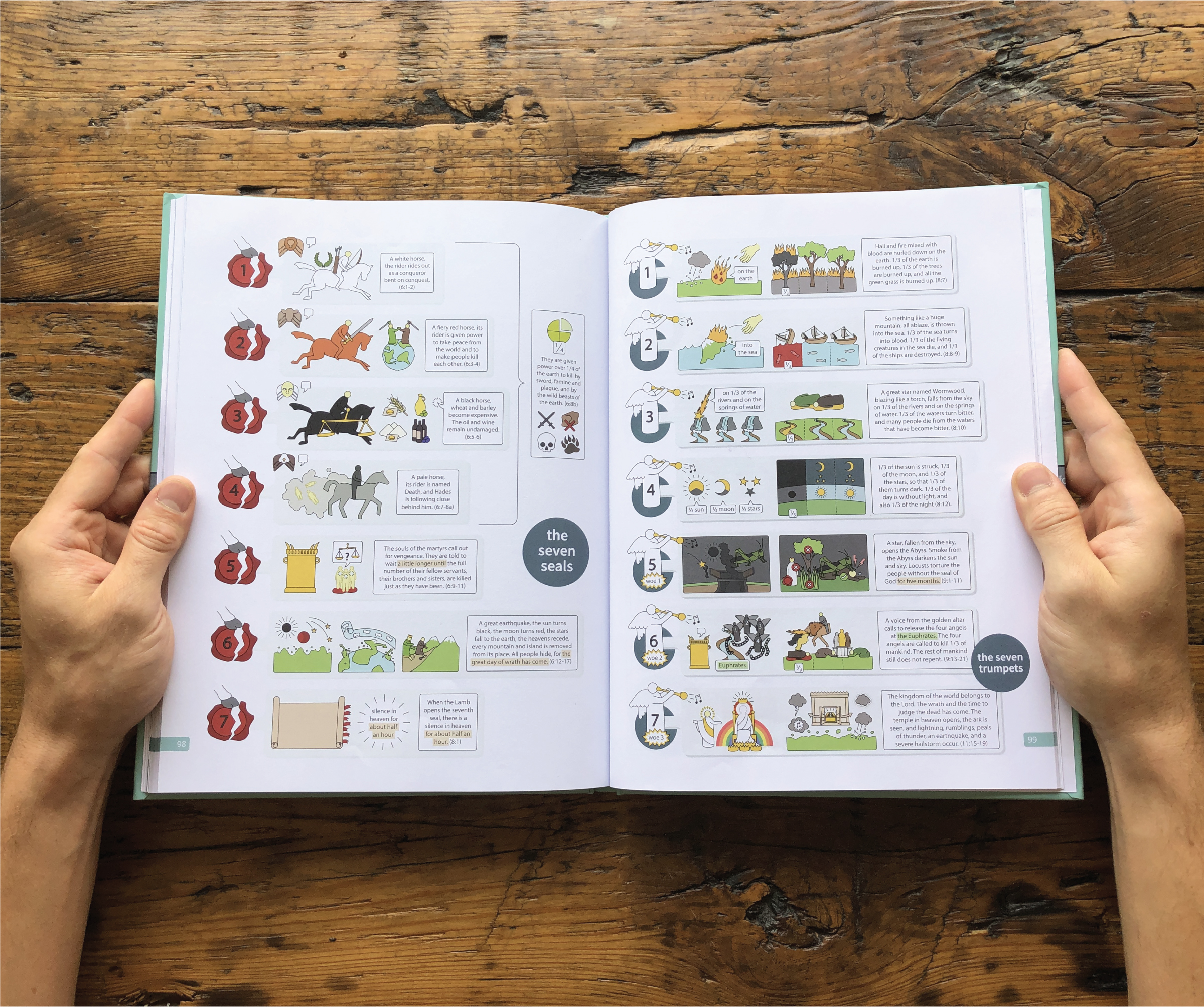 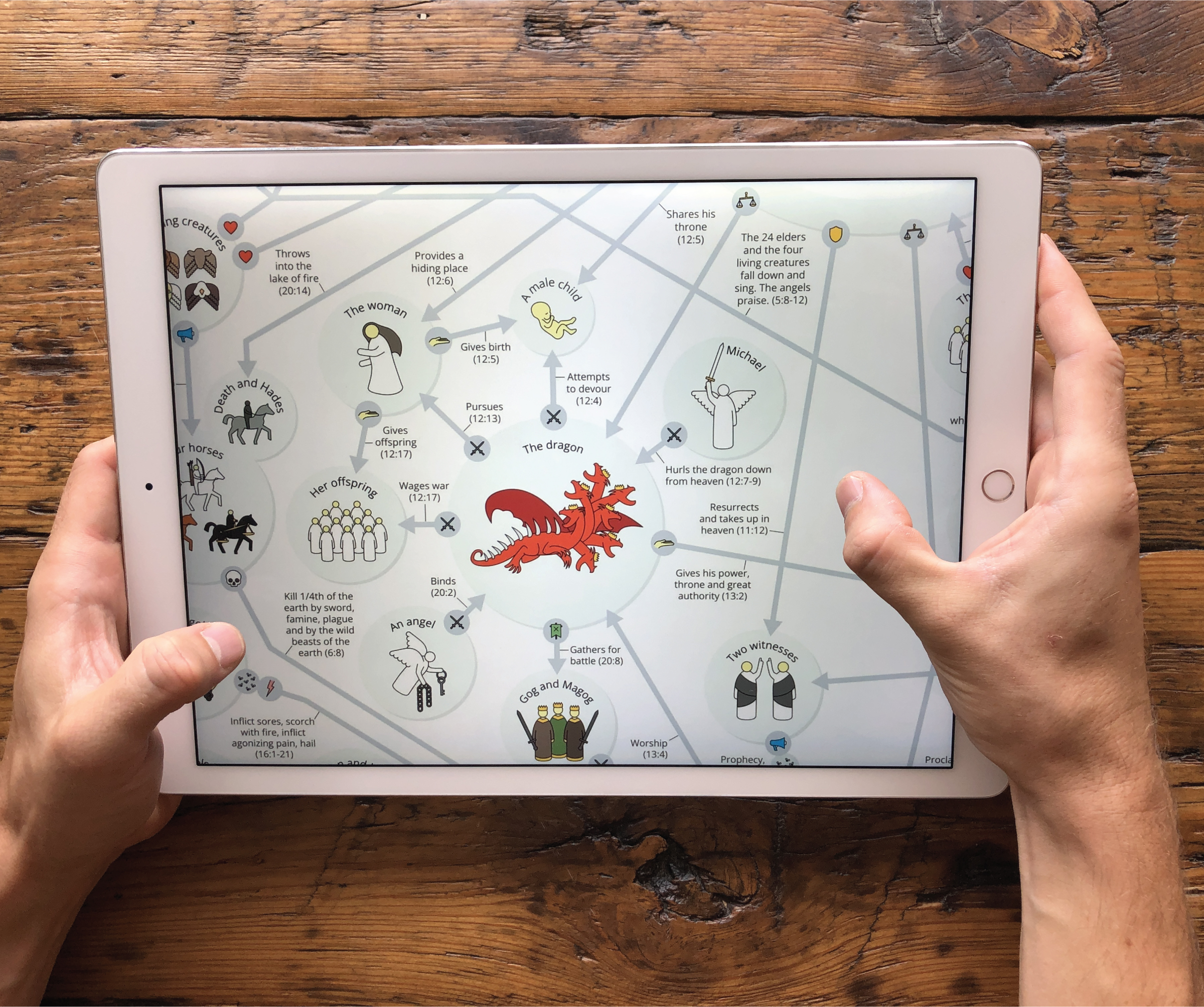